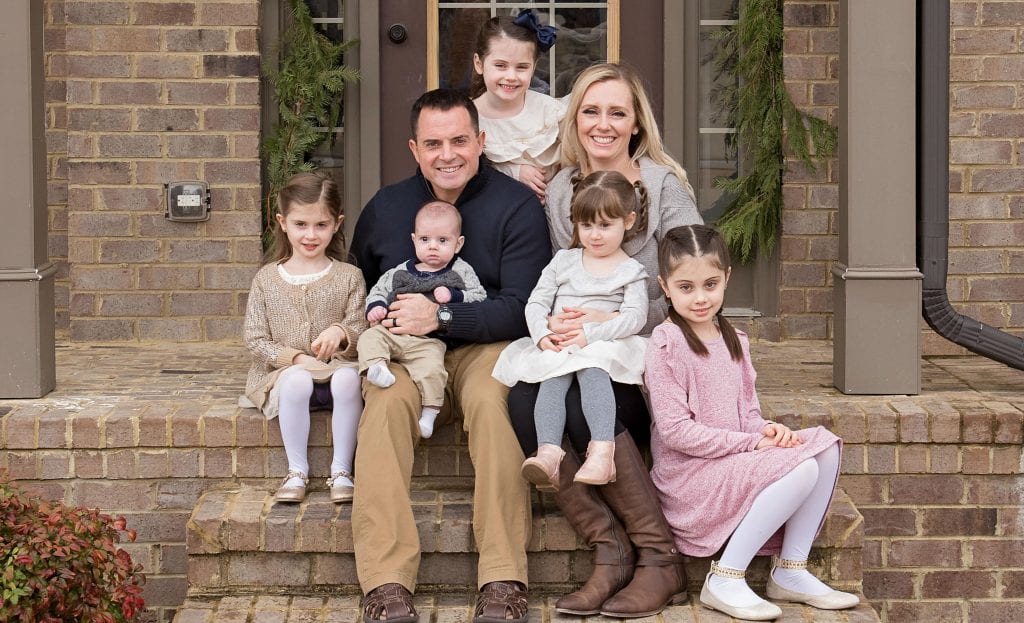 The Harvesters: The McKnight Family

We hope that with this series “The Harvesters” will introduce you to many different followers of Jesus who are striving to make disciples of Jesus out in the world. Whether you’re in the military, a missionary, a scientist, a stay-at-home parent or anything else under the sun. Check out the full series here and may you be encouraged to do likewise in your own “fields of harvest.”

Tell us who you are

Jim and Rolinda Mcknight, we live in Fort Benning, GA with our 5 children. But currently Jim is deployed to Afghanistan.

Who are you focused on in the Harvest?

Currently, Jim is reaching the soldiers in his Brigade in Afghanistan. These soldiers are from the Georgia National Guard and have been in Afghanistan since this past December. He is also holding online training meetings with men in the US and other parts of the world.

Rolinda is continuing to reach out to the people who live in Fort Benning and the surrounding cities. She is also using the internet to train women who are currently overseas.

How did that come about (is there a story there?)

Ten years ago our ministry looked different. Our heart was for laboring among single soldiers at Fort Benning, GA. We would lead a few bible studies targeted for single soldiers. Through those studies we would frequently invite some of the most spiritually hungry over to our home for meals and discipleship. It was during these early years of our ministry, we would also come across men and women who had a heart to go overseas and preach the gospel. As our ministry evolved to accommodate the needs of training laborers who were going overseas, as well as, empower the local laborers, we began connecting with the No Place Left network of Laborers (NPL).

This network of people embraced the vision, as Paul did, that we could raise up people to spread the gospel in a region to such an extent that there would be no place left for us to work. 1 Because of this, God expanded our vision from single soldiers to anyone who had a heart for the NPL vision.

In 2015, we established the No Place Left Army network. Through this, several churches have started and we have witnessed people sharing the Gospel with others, coming to Christ, and baptizing others. Currently, our network expands to over 30 churches nationwide and several more globally. We are seeing men and women leading churches, who in turn have people from their churches who lead churches. In this way we have seen in just the past few months in fact, a 3rd generation baptism in Afghanistan. 2

The challenges that we are faced with, that keep us up at night, are developing strategies to get to the 4th generation3  and beyond. Also, figuring out how to meet the biggest needs of our growing network. As we think about these challenges we are reminded that as Jesus says in John 15, “Apart from me you can do nothing.” These challenges are good for us because it makes us run to the Father, the only One who can make generations and a radical movement happen.

What has surprised you the most about bringing Jesus to people in everyday places?

The two things that most surprise us is seeing where God is working and the faithfulness of Jesus. As we share the gospel as we go about our daily lives or as we are training others who are doing the same, we will hear stories of how God was already working on people’s hearts even before we shared the gospel with them.

An example of this was a young woman who goes to (Rolinda’s) Crossfit gym. Her name is Brooke and she has been following Jesus for a few years. Recently, God has been working on heart, and she has been desperately asking Him to make her more fruitful. After I discovered that she was following Jesus, I offered to train her to share God’s story. So, she took me up on my offer. A few weeks later, we met up at Chick-Fil-A and I showed her how to share the Gospel. At the end of the training she said she had been praying that the Lord would use her. She realized this meeting was an answer to prayer.

After we met, she immediately shared her testimony with her friend who wants to follow Jesus and is broken. I never would have imagined that she was praying that God would help her to be more fruitful. People who we would least expect are usually the ones where God is working. And it further affirms Zechariah 4.6 that says, “ ‘not by might nor by power, but by my Spirit,’ says the Lord Almighty.”

It is true, none of this is done by our hands, by our power, or by our strength. It is only through Jesus. We are so thankful everyday that we are able to see the Lord working.

What has encouraged you the most about your work (in the harvest)?

The most encouraging thing for us is seeing God faithfully use us to develop laborers who are getting to third generation baptisms and trainings. It makes us want to pray bigger and for more generations. In fact, from our earlier days working with NPL Army our vision has grown and our prayers have shifted to bigger things. Our prayer for No Place Left Army used to be that God would raise up an army of laborers for the army. Now we are asking God to let No Place Left Army raise up an army of laborers from all nations.

Do you do church in the harvest? How does that look different/the same as what we traditionally see as church today?

We definitely do church in the harvest. Before Jim deployed we were leading a church on Sundays in Atlanta that met weekly. We were also leading an online church on Friday nights that met biweekly. The curriculum that we used was developed by Jim and other leaders in the NPL Army network, which uses the three thirds process as the framework. Each church meets for about two hours. We come together and talk about stories from the Harvest, churches that our laborers have planted, and what strategies do we need to implement to see more growth. After laboring all week long, it is so encouraging to meet as a body. We are able to lick our battle wounds and get back to it the following week. I would say the model that we use is different than a traditional church model for several reasons. Some of the obvious differences are:

1. We meet in people’s homes. Where the people of the church are- that is church!

2. We discourage high attendance. From day one, we discourage people to bring a friend back to the church. We frequently say, it is authorized to bring people, but strongly discouraged. We say this because we are trying to empower our church members to start their own churches with their own friends and family.

3. We use a hands-on approach. As we learn new and old strategies, we practice. Whether its learning how to share the gospel or modeling how to do church in the harvest we always take time to practice in the safe space of church, every time we meet.

4. We make application a high priority. In a traditional church, this is not entirely practical. After you listen to a message, you typically leave. You may have a moment where you smile and shake the hand of the Pastor and say, “Great message!” and then you leave out the door. Due to the large number of people attending, it would be impractical for the pastor to write down everyone’s applications from the message. But in our smaller gatherings we are able to make application a high priority. James 1 says do not merely listen to the word and so deceive yourselves, but do what it says.

5. We are casting identity of the Priesthood of the Believer. Every time our church meets we are constantly imparting the concept that God has given them the authority to start churches, baptize others, lead the Lord’s Supper, and all other duties that you would typically see a Pastor doing in a traditional church. It is so encouraging to us to see how empowered they feel when they realize they have the freedom to practice these commands from the Lord.