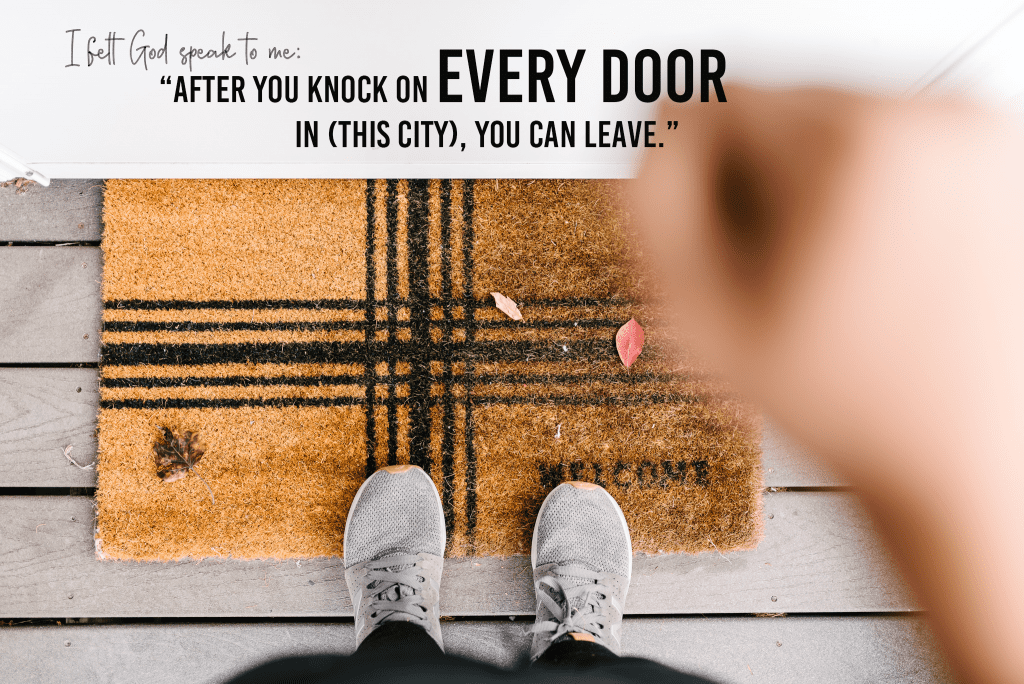 The Harvesters: “Everyone Has Heard the Good News”

This week we’re keeping certain details about our Harvesters anonymous. They are currently headed to a new country where sharing the good news about Jesus is frowned upon and we want them kept as safe as possible as they continue to spread the Good News to our Muslim cousins.

Where are you laboring in the harvest?

For the last 9 years I’ve lived in a US city of about 25K people who are primarily Muslim. As you read this my wife and I are settling into a new country where we hope to reach even more with the Gospel of Jesus.

How did your work in the US city come about (is there a story there?)

For this reason, we distributed Jesus Films in 16 languages and gave out New Testaments in the responders’ languages. We attempted to follow up on every positive response within a week. When a home opened up, we stayed there and stopped door-knocking during that time-slot. We can say in honesty, that virtually everyone who lives here has either has received a personal invitation to learn more about Jesus, or knows someone who has.

We’ve seen God perform miracles, and we’ve grown in grace. We are still following up on Muslim friends we met even in the last few months, some of whom are reading the Scriptures. We still have lasting relationships with people we have met over the years.

I know that this method (knocking on doors to share the gospel) of reaching our city might not be the best. But it’s the best way that I know how to pursue the great commission 1. When I find something that follows Jesus more closely, I will do that instead.

The only reason we should quit or transition into a different way of doing ministry is if we learn something new or Jesus tells us that He wants us to do something differently.

I have been a young man of low influence for most of this time. I didn’t have the credentials to be a leader, but I sought to set the pace for those around me in prayer, in study, in evangelism, in memorizing Scripture, and more.

What has surprised you about bringing Jesus to people in everyday places?

I have been out door-knocking with many different people. Attitude really matters. Some people don’t really believe in evangelism and are doing it begrudgingly. Some people have great expectations. This makes and enormous difference. In addition, some people create a rapport with strangers and attract people to themselves very easily. These are usually extroverts who have a lot of energy and laugh a lot. Going joyfully is a fruitful practice. I had one friend who I pester constantly to go out with me. He’s not the most faithful or available, but he is truly gifted with people and bold as a lion. It is worth it to identify people’s gifting and involve them strategically.

What has encouraged you about your work (in the harvest)?

I probably would have quit long ago if it wasn’t for the constant encouragement of my friend Chuck and others. Chuck had so much he could have criticized and corrected me for. I was such a negative, arrogant, knucklehead. He has watched me royally screw things up. Yet, he has constantly encouraged me and believed in me. Jesus is like this too. He trusts and believes in us in spite of intimately knowing our faults and foolishness.

What is an important lesson you’ve learned from doing this type of outreach?

Praise, worship, thanksgiving, and rejoicing are commands in the Scripture and are vital to perseverance. They change our hearts and attitudes and give us strength to persevere. I am in a long process of trying to learn to give thanks and rejoice with the same discipline that I pray, read the Bible, and share the Gospel. On the days when I had to go out and knock on doors by myself, I often would force myself to give thanks and praise God on the way there and the way back. It changed my outlook, attitude, and my ability to love people. A sacrifice of praise is an antidote to discouragement and weariness.