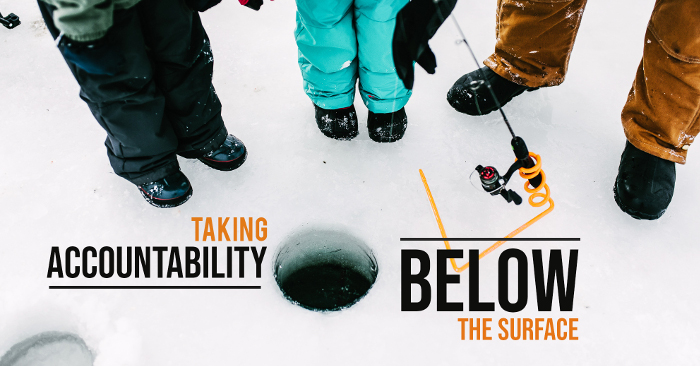 The ABCs of Biblical Accountability

The infamous RMS Titanic struck an iceberg in the icy North Atlantic Ocean at approximately 11:40 PM on April 14, 1912. Bound for New York, over 1,490 people never made it, perishing in the frigid waters. The visible, above-water portion of the iceberg didn’t sink the Titanic. Rather it was the invisible portion lurking below the waterline that doomed the ship and so many of those on board.

Icebergs are 90% below the waterline, meaning we only see about 10%, with the rest remaining hidden beneath the surface. People are much the same. Underneath our visible actions or behaviors (both good and bad) is a greater array of the unseen– our motivations, rationalizations, and beliefs.

For the follower of Jesus, behavior is important– for “no good tree bears bad fruit” (Luke 6.43) and “you will know them by their fruit” (Matthew 7.16). But so is what underlies and drives the behavior– “The good person out of the good treasure of his heart produces good, and the evil person out of his evil treasure produces evil, for out of the abundance of the heart his mouth speaks” (Luke 6.45).  Too often, when “spurring one another on toward love and good deeds,” (Hebrews 10.24) we limit our accountability for one another to only what is seen. We end up practicing what Dallas Willard in The Divine Conspiracy termed  “the gospel of sin management”.

The gospel of sin management is nothing more than behavior modification without a greater desire for heart transformation through Christ. Encouraging one another on towards right behavior is certainly one important aspect of accountability, but there is so much more to gain!

Going Below the Water Line

Biblical accountability seeks to go beneath the waterline to reveal the underlying motives and reasons for our visible actions.  In James 5.16 we are exhorted to “Confess your trespasses to one another, and pray for one another, that you may be healed. The effective, fervent prayer of a righteous man avails much.”

In this passage we learn that confessing our sins to one another and praying for one another is the gateway to being healed. But that’s not all it says… the verse goes on to say that the “effective, fervent prayer” is what accomplishes much! To apply effective and fervent prayer in accountability we must seek to go beneath the surface and expose the unseen. Once revealed, we can allow the light of Christ to cleanse us from all unrighteousness– not just the tip of the iceberg!

A few years back, I had a friend who was providing me with this sort of biblical accountability. I had asked him to keep me accountable on matters of purity– and this he did. He always asked how I was doing with guarding my eyes, purity on the internet, and those sorts of things. If there was some behavior that needed to be confessed, he listened, reassured me of Christ’s forgiveness, and helped me to develop a plan to avoid the behavior in the future. And if he had stopped there, I would have been grateful.

But he didn’t stop there– he cared enough to delve beneath the behavior to unearth what else was going on in my heart. I’m sure at times it was uncomfortable for him, but he cared and loved enough to do it. In the end, many of the systemic issues such as lies I was believing or idols I was cherishing were brought to light and I began to realize how they also drove other behaviors in my life such as people pleasing and telling white lies.

A Framework to Get Started

A:  Ask. Too often we shy away from really checking in with each other and asking the difficult questions.  If someone has asked you to hold him or her accountable, then ask how it is going with that specific behavior.  Not to ask is not to care.

B:  Go Below the Water-line.  Don’t stop with the behavior.  If there was an issue with the accountability – for example, the person you are holding accountable was harsh with his wife – ask what was going on at that time in his heart.  How did he feel? What did he feel coming home from work that evening? What had happened at work that day?

Tip: Try to avoid asking, “Why?” It puts people on the defensive and makes them begin processing rationally, in their heads, but you are trying to go deeper, to the heart.  Continue to ask such questions, seeking to go deeper and deeper. For example, if they say, “I left work feeling frustrated and stressed because the boss gave me another last-minute tasker,” you may ask, “What’s at risk if you don’t complete the tasker on time?”

Your role is to ask probing questions and occasionally provide observations.  Don’t seek to solve problems, just seek to unearth what is going on.

C: Have the Courage to open up yourself.  Maybe this should come first.  You will probably need to model it for your friend especially if they have never encountered this type accountability before.  Your courage to go beneath the waterline will encourage your partner towards the same type of transparency in accountability.  Furthermore, often the best accountability is two-way. With the friend I mentioned above, I was also keeping him accountable, and we were helping each other.

How and with whom can you apply the ABCs of biblical accountability in your efforts to live as a disciple-maker? 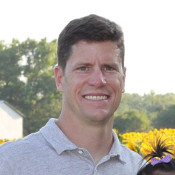 After serving a full career in the U.S. Army, Jim is now dedicating his time to coaching and empowering Kingdom leaders who are passionate about living and advancing the Gospel of Jesus Christ and His Kingdom. Jim and his family currently live and serve in Kentucky.