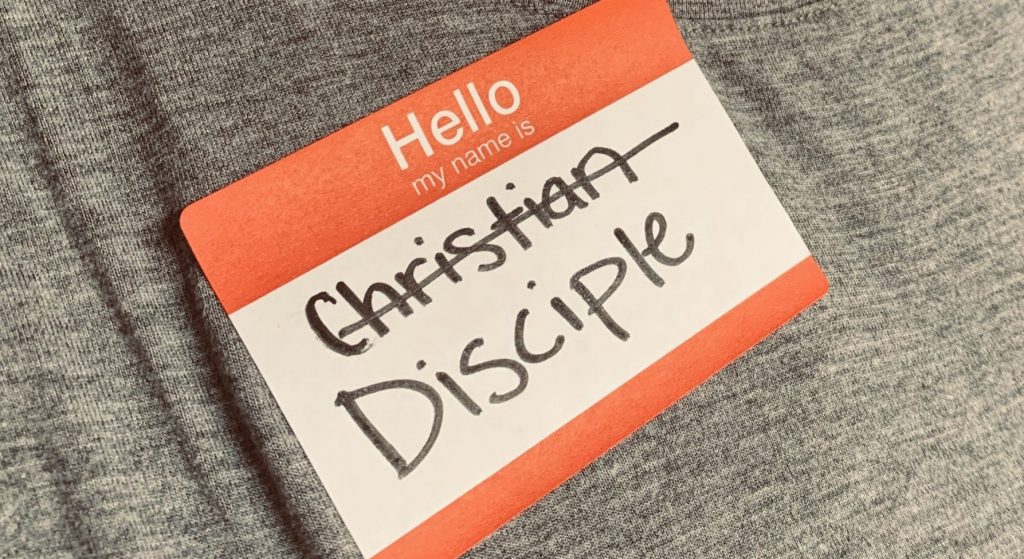 What’s in a Name? Christian vs. Disciple

Think about all the titles and identifiers you might use to introduce yourself: a father, a soldier, a wife, a Christian? Titles are useful because they help others figure out who we are and what we’re about.

But titles do more than state our identity to others. They also shape our identity with ourselves. This is why I believe as followers of Jesus we should get in the habit of calling ourselves disciples rather than Christians.

Now some may say it doesn’t matter—we can be known as both or either. But I’m convinced it does matter. And it matters especially because what we call ourselves changes the way we think about ourselves.

If you’re not actively learning from Jesus or living for him, you can still call yourself a Christian and most people won’t bat an eye. But calling yourself a disciple changes things. It gives you something bigger than yourself to live into.

By definition a disciple is someone who is actively learning and living as a follower of someone else, or of some set of teachings. By calling yourself a disciple of Jesus you are declaring that you’re living for him. And that’s powerful!

Here’s why: If you’re calling yourself a disciple but living for yourself and not for Christ, it’s obvious you’re either dishonest or delusional. It’s like going to a restaurant with someone who claims to be a vegetarian but then watching them order and eat steak! It’s obvious they aren’t really vegetarian.

The Problem with "Christians"

Jesus never called his followers Christians. He called them disciples, and the emphasis was always on beliefs that led to action. A favorite example is found in Matthew’s gospel. Though many claimed devotion to him, when Jesus climbed into a boat—only his disciples followed him.1  Disciple meant action. It meant following. And the word disciple is used throughout the New Testament to describe those who actively followed Jesus.

In contrast the word Christian is used only three times in the Bible. 2  And it was not a name the disciples of Jesus gave themselves. Originally, it was an insult used by nonbelievers to make fun of those who were trying to be “little Christs”. They thought the believers were infatuated with this person named Christ. It would be similar to us today calling a Star Trek fan a “Trekkie”, or someone really into Justin Beiber a “Belieber.”

Today the word “Christian” has lost much of its value as a descriptive title. It certainly isn’t commonly understood as describing “someone who is infatuated with Christ.”

For some, Christian just means “not Muslim” or “not Jewish” or “not Hindu”. In the United States it is often synonymous for someone  with conservative political  or moral views. As an identifier, the word Christian doesn’t necessarily mean what we think it means.

Calling yourself a disciple is more in line with what the first followers of Jesus called themselves. It’s worth doing because it states a clearer identity to others and shapes a stronger identity in you.