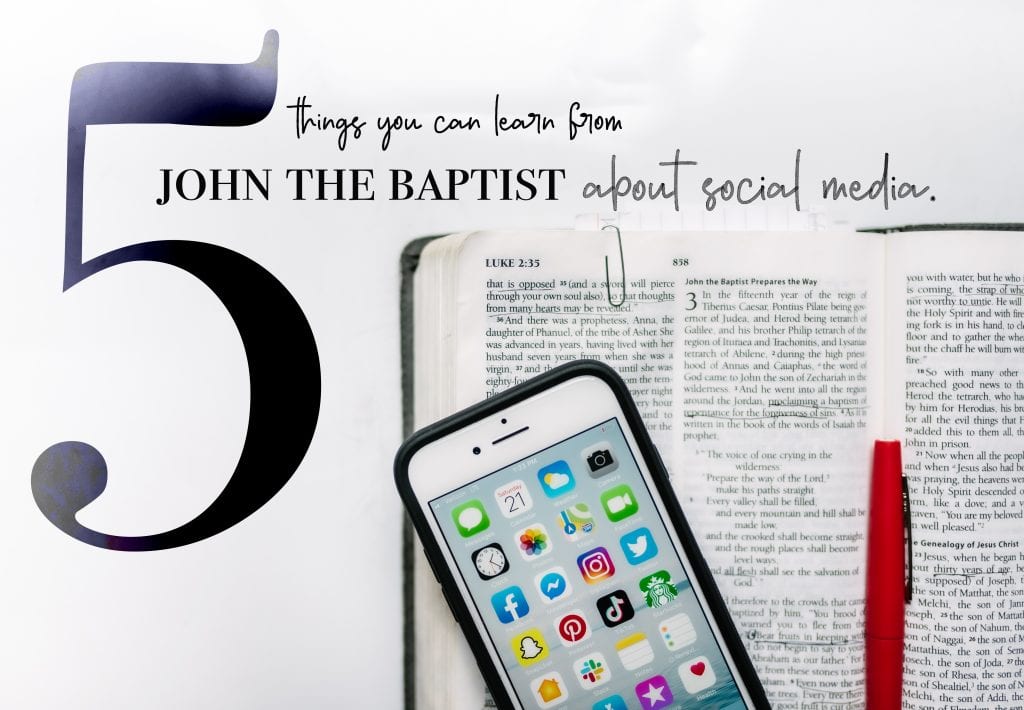 John the Baptist may have lived 2000 years before Mark Zuckerberg but you’d be surprised how much he can teach us about pointing people to Jesus in the modern era. Below are 5 tips that @JtheB can teach us on how to represent Christ well on our own social media platforms.

1. Have a Message Worth Listening To

At some point, John decided to become a public figure. Luke’s gospel tells us exactly when this happened: “In the fifteenth year of Tiberius Caesar…” 1

Matthew’s gospel tells us where and why John went public: “In those days John the Baptist came, preaching in the wilderness of Judea, saying, ‘Repent, for the kingdom of heaven is at hand.’” 2

The first thing we can learn from John the Baptist is this: He became a public figure so that he could be a voice in the wilderness, faithfully sharing a message people needed to hear.

If you’re on social media, you too at some point decided to become a public figure. You may have never thought of yourself this way before, but every time you post on Facebook, Twitter or Instagram you’re broadcasting something into the public sphere where hundreds or thousands of people can hear and see it.

If you haven’t thought about why you’re on social media and what message you want people to hear when they see your posts, then you probably don’t have a consistent message and you’re definitely in danger of sending mixed signals.

James tells us that a fountain should not send from the same opening both fresh and bitter water.3 But many Christians are guilting of doing just that on social media. This ends up confusing people who know us on social media and is a terrible way to represent Jesus.

John knew his message and he stayed on brand. It didn’t matter when you came into contact with his content, you were going to hear the message God had given him to share: “Repent, for the kingdom of heaven is at hand.”

Question: Do you know your message on social media and are you staying true to it in everything you post?

I imagine that a guy who’s eating locusts and wild honey, wearing camel’s skin and rocking hair that just won’t quit, was a sight that drew people from far and wide to hear his message.

To say John that stood out is an understatement. And I’m sure that the word spread quickly about this crazy man of God who was speaking to crowds in the wilderness.

Of course, it had also been hundreds of years since a prophet had come from God with a message for the Jewish people. This intrigued people as well. There’s no question, John captured people’s attention. They wanted to see him and hear what he had to say.

Today more than ever there is a battle for people’s attention. Companies spend millions trying to get you to stop scrolling and watch their ad. You can have the best message in the world but if you don’t have people’s attention, they won’t hear it.

Not only did John have a message worth listening to, he had people’s attention. We too need to learn how to generate interest and not simply post truth into the vacuum of social media.

Question: If you’re posting about your faith on social media, how can you grab people’s attention and encourage them to engage more with you?

3. Give Clear Calls to Action and Make It Easy for People to Respond

Because of this, John set up shop “in all the district around the Jordan River.” 4 It makes sense: John wasn’t just giving people good news. He was challenging them to take action and making it as simple as possible for them to respond.

As we represent Jesus on social media our goal is not to simply “play to the amen corner”, as in posting things for those who already agree with us. And it’s not simply to inform people who might not know the truth. Ultimately it’s to call people to action, to point them to Jesus and give them practical steps they can take to move towards Him.

Question: How are you challenging people to take action? What can you do to make it as simple as possible for them to respond?

John the Baptist was extremely popular. The crowds were fascinated by him. Kings and rulers heard about and wanted to meet him. He was for sure blue check verified.

But John knew his popularity wasn’t for him. It was an opportunity to point people to Jesus. “He must become greater. I must become less.” 5

Social media can easily play to our narcissism. The clearest example of this might be the ubiquitous selfie.

But at its best social media is about being social. It’s an opportunity to make real connections with real people. No one wants to be social with the person who only focuses on themselves.

When it comes to social media, it’s not about me. I’m not saying we should never post a selfie or give a personal update. Friends and family enjoy seeing those… in moderation.

But our guiding attitude should be what Paul tells us in Philippians 2.3-4: “Do nothing from selfishness or empty conceit, but with humility of mind regard one another as more important than yourselves; do not merely look out for your own personal interests, but also for the interests of others.”

For the follower of Jesus, social media presents an amazing opportunity to project our faith to a wide audience. People are paying attention, even when they don’t engage with what you post.

Let them see Jesus. Point them to Him.

Question: What is your guiding attitude about social media? Is it mostly about you or others? Are you pointing people to Jesus?

5. Be the Starting Point, Not the Destination

The crowds who sought John in the wilderness may have thought he would be the solution they were looking for. But John knew his limits. He understood that his role was to prepare people so they could connect with the One who was truly worthy and who would transform their lives. 6

He was the starting point, not the destination.

Question: What are the limits of social media for ministry? How can you use social media to help people follow Jesus in the real world?

You’re on Social Media. Make the Most of It.

Jesus challenged the people of his day: